In 2017, PCCSU was awarded the Drug-Free Communities (DFC) grant in partnership with ECU. DFC is a national program that provides funding to local coalitions to build their capacity and enhance their strategies to prevent substance use among youth in their community. In the case of PCCSU, this grant will enhance several of its current initiatives to prevent underage drinking and opioid misuse among youth. Specifically, DFC will continue our efforts to ensure retail merchants are educated and asking for identification. Additionally, we have enhanced our partnership with Pitt County Schools and aim to provide education to parents on how to communicate with their child about substance use. We have formed a new partnership with Parents for Public Schools of Pitt County to also reach parents with messages on underage drinking and opioid misuse.

Furthermore, DFC allows PCCSU to build capacity in its board, membership, and Youth Team. Because of DFC, PCCSU will return to its old model of holding coalition meetings quarterly and town halls twice a year. DFC is continued funding for 5 years and the initiatives build and evolve from year to year. While this grant is a wonderful compliment to the work PCCSU is already doing, it is temporary and limited to only what is outlined in our scope of work. We continue to look for other sources of funding to provide sustainability to PCCSU and expand its efforts.

BRACE operates as a collaborative referral network to reduce ACEs in Pitt Co. and increase resilience in children. BRACE includes members of law enforcement, social services agencies, mental health practices, childcare providers, the health department, physicians’ offices and university researchers. BRACE was created due to funding received by Dr. Matthews to begin ACEs work in Pitt County, which resulted in a community-wide training on ACEs integrating ACEs training for school personnel. Adverse childhood experiences (ACEs) was a landmark study completed in the mid-1990s examining the relationship between childhood traumas and health outcomes, including substance use and mental health. PCCSU, in collaboration with ECU, is working with community partners to explore ACEs and trauma-informed approaches in Pitt County. In working with Trillium, TEDI BEAR, Eastern AHEC, Pitt County Schools and other community organizations, PCCSU aims to increase the awareness of ACEs and lasting effects on individuals, with an interest in substance use and mental health issues.

Alcohol Purchase Surveys are designed to determine which retailers in Pitt County have employees who sell alcohol without verifying that the individual has a valid ID. These surveys are not a law enforcement endeavor as all volunteers who complete the survey are over the age of 21. For every store where an alcohol purchase survey was conducted, merchants are provided education on the outcome of that purchase attempt and provided materials on how to continue to prevent the selling of alcohol to minors. Talk It Up. Lock It Up! materials are distributed at every PCCSU event, even if the event focuses on substances other than alcohol. After all, many youths start consuming alcohol long before they try other drugs. Adults are encouraged to lock up their alcoholic beverages at home to prevent access to underage individuals. We continue to collect parental pledges to lock up their alcohol at home. PUDI has also funded the Youth Team by providing marketing materials for their initiatives.

The STOP Series hopes to answer questions that parents and loved ones have about substance misuse and substance use disorders. The STOP initiatives, STOP and STOP 2.0, have focused on the opioid crisis in Pitt County and provides education on how to help a loved one, prevent use and seek treatment. With advice from experts and those with first-hand experience, we hope to bring about awareness of this issue. Panel discussions are available to community partners upon request and consists of a person who has lost a loved one to an overdose, a person that has a loved one in recovery, a therapist, and a person in recovery who will share their stories. The video Four Stories, One Community was also created during this initiative. The video can be found on the PCCSU YouTube page and on our Facebook. The goal of the video is to allow people who can’t come to the panel discussions receive answers to questions they might have.

Created in 2014 through the Preventing Underage Drinking Initiative, the Team’s main focus is to prevent underage drinking through collaboration with local law enforcement, parents, and government officials. We now have expanded our team to include 16 ambassadors representing 4 local high schools and the Pitt County Early College. The Youth Team has participated in activities such as advocating for the NC Good Samaritan Law and the creation of a PSA about the law, wrote letters to the editor for National Alcohol Awareness Month (April), presented at the PARC conference, created personalized holiday cards for individuals who participate in the Greenville syringe exchange and have participated in several fundraisers and leadership development activities. 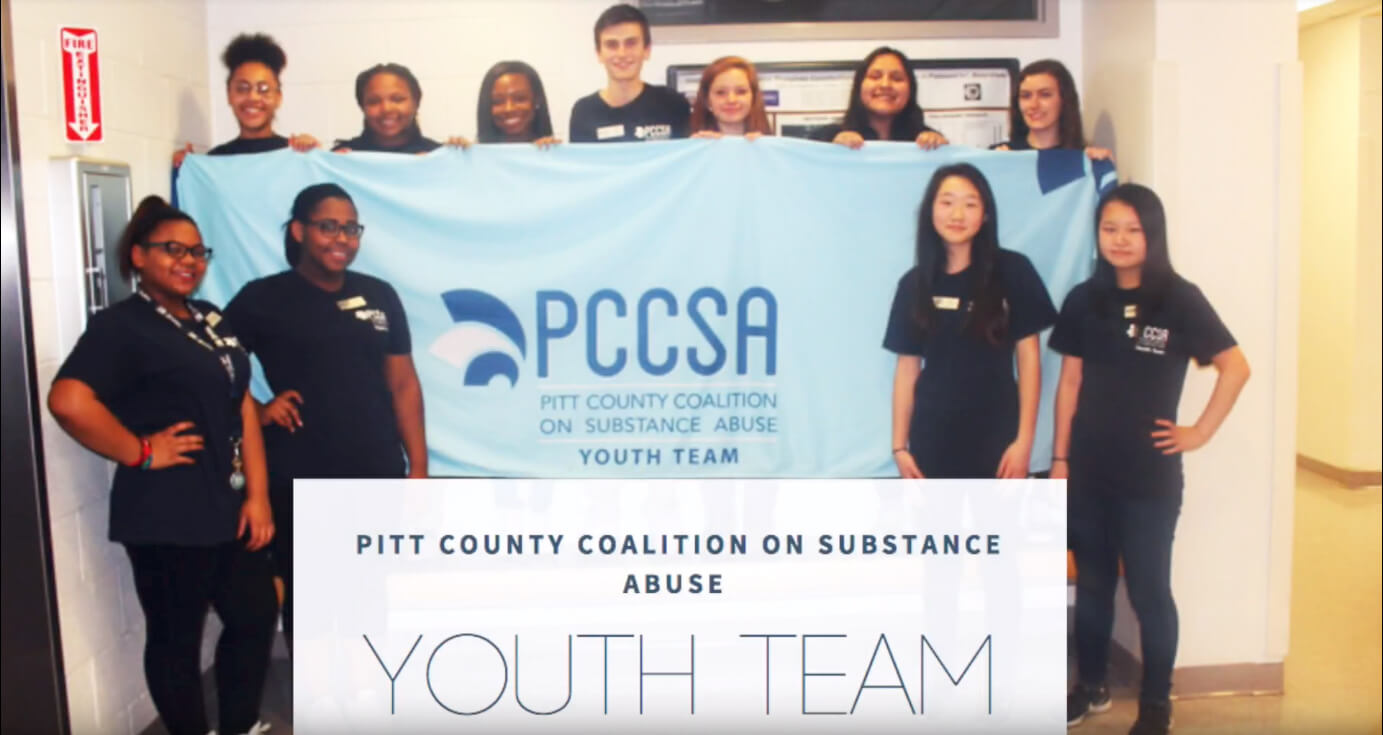 Each September, The Pitt County Coalition on Substance Use (PCCSU) joins the Substance Abuse and Mental Health Services Administration (SAMHSA) to celebrate National Recovery Month. For the past decade, the PCCSU has celebrated those in recovery from substance use and other mental health disorders by raising awareness and celebrating those who have made recovery possible in our community. This event spreads the positive message that behavioral health is essential to overall health, prevention works, treatment is effective, and people can and do recover.

The Dinner of Hope Fundraising Gala, our largest fundraiser of the year, is designed to raise awareness about substance misuse disorders and bring community members together, while benefiting a great local resource. The coalition works within many different sectors of the community to provide education and advocacy. This dinner supports our initiatives like the PCCSU Youth Team, STOP 2.0 Series (Stop the Opioid Problem), and PUDI (Preventing Underage Drinking Initiative), just to name a few. This annual fundraiser is held in February and helps PCCSU achieve its mission of bringing about a community where youth reject substance use, adults utilize low-risk choices regarding substance use, and treatment services are available to those in need.

PCCSU aims to enhance its current efforts, as a DFC-funded coalition, to reduce youth opioid and prescription drug misuse by changing the culture and context regarding acceptability of these substance use behaviors. To achieve these goals, we seek to (1) prevent initiation of prescription opioid misuse and escalation to later heroin use among youth ages 12 to 18 in Pitt County, (2) decrease perceived parental approval of prescription opioid misuse by 12 to 18 year-olds in Pitt County, and (3) increase youth’s perception of harm of misusing prescription opioids. To accomplish these objectives, we will follow the Strategic Prevention Framework as we partner with local pharmacies to implement on-site medication disposal programs and the Lock Your Meds™ campaign and conduct activities spanning the Seven Strategies for Effective Community Change.

In 2021, PCCSU was awarded funding as a part of SAMHSA’s Coronavirus Response and Relief Supplement Appropriations Act. This grant supplements the Substance Abuse Prevention and Treatment Block Grant (SABG). The purpose of this funding is to address and reverse some of the physical and mental damages that have been done due to the pandemic. During the pandemic, Pitt County saw an increase in alcohol sales and opioid overdose deaths, and a decline in mental health. Due to the statewide restrictions and stay-at-home orders causing children to learn remotely, as well as the increase of off-premises alcohol sales (where alcohol is purchased and consumed in private homes), access to alcohol within homes has become increasingly important to address. In addition to alcohol access, many children and adults have experienced poor mental health caused by the extreme stress of COVID-19. This grant allows PCCSU to focus primarily on reversing the negative effects that COVID-19 has had on the citizens of Pitt County and surrounding areas.

The long-term goals of this grant include:

To address the underlying issues associated with substance use and to reach these long-term goals, we chose to implement the following:

Stay up to date with our events.

You have Successfully Subscribed!

Your information will never be sold or shared to third parties.